Each full moon the Victoria Falls rainforest re-opens in the evening for special tours to witness the magic of the lunar rainbow -weather and spray permitting!

What is a lunar rainbow?

Just like its day-time equivalent, the lunar rainbow or ‘moonbow’ is created as light is refracted through water particles in the air, but instead of the light source being the sun it is now the moon.

Lunar rainbows are much fainter than their daytime forms with which we are all so familiar. This is because of the lower amount of light reflected from the surface of the moon. Only when the moon is full and skies clear of cloud is enough light reflected to create a moonbow, which always occurs in the sky opposite from the moon in relation to the observer.

The human eye finds it difficult to discern the colors in a moonbow because the light is usually too faint from the moon to excite the human eye cone color receptors (this is true of all night-time vision). Hence, moonbows can appear to some human eyes to be washed-out and white, without the concentrated colors of a daytime rainbow.

This varies according to the quality of the individual's night vision and the number and responsiveness of color-sensitive cones present in the retina of their eyes.

However, the vibrant colors of a lunar rainbow do show in photographs with a long exposure.

When is the best time of year to see a lunar rainbow?

This comes down to a combination of factors. 1) Sufficient rising spray to refract the moonlight. 2) Not too much spray to obliterate the background, the waterfall 3) A full moon, including the night before and after -3 nights only per month 4) Clear skies, so the moonlight is not diffused.

The optimal months for these factors to occur together, on both the Zimbabwean and Zambian side, is June, July and August. That is not to say you won't see the lunar rainbow outside of these months, just that these are the best.

February and early March have the right water levels but have higher a chance of cloud cover and the tour being canceled. No moonlight means no lunar rainbow. This, unfortunately, is just luck of the draw but the months of December, January, February and March are the main rainy season, so there is more likelihood of cloud cover. The months of May, June, July and August are the winter months with clear skies on the whole.

The Victoria Falls high water flow months are late March through till early June, with peak flow around April and May. In these months there is a terrific amount of rising spray, which is great for big and strong moonbows, but with so much spray it tends to obliterate the background somewhat. This might be more pertinent to the photographer than it is to the casual observer.

No spray from the falls means no lunar rainbow, so in the dry season months of September, October, November, and early December, it is only possible to see the moonbow from certain viewpoints but not all.

As the Zambian side almost completely dries up during these months, it is not visible from that side, and in fact, the tours are closed (the exact dates vary year to year, depending on water levels).

On the Zimbabwean side, the moonbows are still visible during these dry months, as there is still sufficient spray but the moonbows will not be as strong or as big and are only visible from a couple of viewpoints.

What is the best time of night to see a lunar rainbow?

This spectacle is best witnessed in the hours just after moonrise before the moon gets too high. The rainforest opens during these optimal hours and the times are detailed below for both winter and summer.

The rainforest only opens for lunar rainbow tours on 3 nights; the night before, the night of, and the night after the Full Moon (see chart below for dates). This is when the moon is at its brightest and the chances of seeing a moonbow are greatest.

What are the best viewpoints to see the lunar rainbow? The waterfall runs in an approximate east-west direction. The moon rises in the east and sets in the west, varying northwards and southwards moderately throughout the year. To see a lunar rainbow you need the moon to be behind you. So in the hours after the moon rises, you will need to be looking in a westerly direction.

Due to the physical layout of the waterfall and the width of the gorge in places, the absolute best viewpoints are in Zambia along with the eastern cataract, but only in the months detailed above, in the "best time of the year" section.

On the Zimbabwean side, you can also see fantastic lunar rainbows but you are a little bit more limited due to the width of the gorge in places. The best viewpoint is looking into Devils cataract. 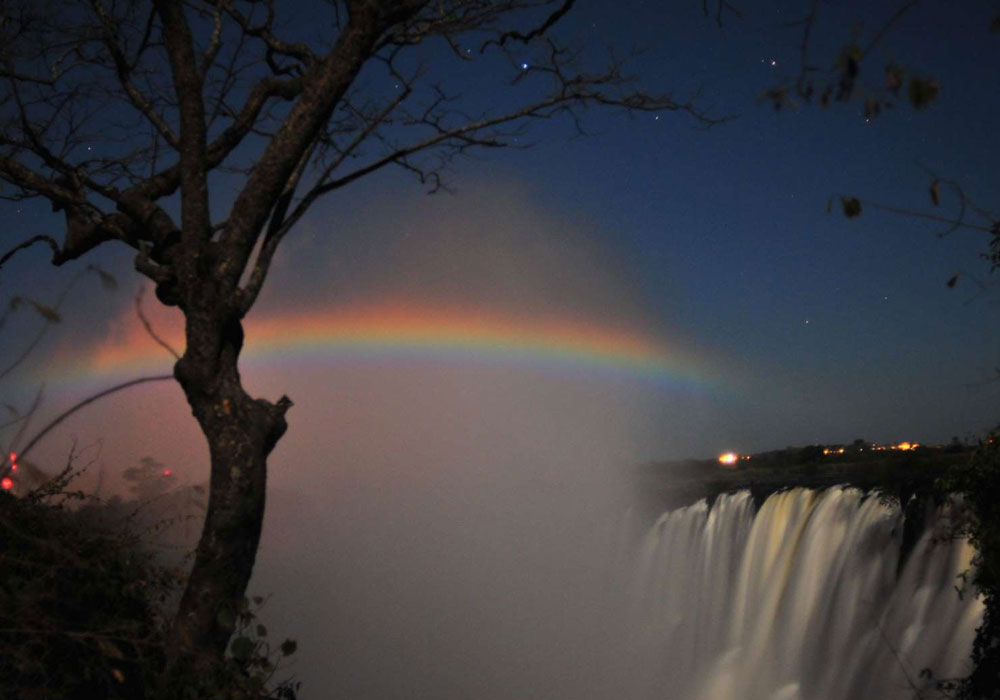