What Makes Victoria Falls Unique - Thrilling Facts To Watch Out For!

Upon travelling to Zimbabwe or Zambia you might be wondering “Am I really going all the way to Africa to see a waterfall?  What is so special about it? Why all the hype? “Well they say seeing is believing and in as much as we can try to explain it all, you will definitely appreciate it once you visit the place. Victoria Falls is not your ordinary everyday type of waterfall, there’s more to it than meets the eye, more to it than you could ever imagine.

It is such an Impressive sight and is something you need to experience at least once in your lifetime. It’s not in the Victoria Falls Waterfall itself but also in the surrounding area, the wildlife and the Victoria Falls Activities on offer. Located on the border of Zambia and Zimbabwe, Victoria Falls Tours boasts of such great history and value. Dr. David Livingston, the first European to see the falls, named them in honour of the Queen of England at that time, Queen Victoria and it just goes to symbolise how precious and important he saw them to be.

One of the Seven Natural Wonders of the World

Victoria Falls makes the list as one of the Seven Natural Wonders of the world alongside Mount Everest, The Great Barrier Reef and some others. It is such a great wonder of the world that it made the top 7, if this doesn’t make it more unique and special I don’t know what will. The Seven Natural Wonders of the World are statistically significant natural marvels from all over the world. Each wonder is distinct in some way. Traditional or historical significance played a role in determining which wonders were included in some cases.

Victoria Falls was declared a UNESCO World Heritage Site in 1989. A World Heritage Site is a natural or cultural landmark that has been recognized by the United Nations Educational, Scientific and Cultural Organization (UNESCO) to be worthy of preservation due to its universal value to humanity, both for the present and for future generations to come.

Victoria Falls was originally located 8 kilometres downstream of its current location.  Over the last 100,000 years the falls have been receding and this is due to the weak basalt rock which is perpendicular to the river’s flow. In addition 2 million years of erosion has been happening and has resulted in seven subsequent gorges that zigzag upstream from the previous one.

Without the Zambezi River, the Victoria Falls would not exist. The river is the fourth longest River in Africa after the Nile, the Niger and the Congo River. The Zambezi is 2,574 kilometres in length and the falls are nearly halfway along its course from its source in Zambia to its mouth. The Zambezi River flows east from the falls, passing through six countries before entering the Indian Ocean. The river is home to 75 different types of fish. It’s also famous for its bream and fighting tiger fish. You can also get to experience a beautiful Sunset Cruise, lunch or dinner cruise on the Zambezi River.

Victoria Falls Rainforest on the Zimbabwean side of the falls happens to be the only place in the world that receives rainfall every single day of the year no matter how cold or how hot it gets. The rising spray from the falls creates a natural rainfall for the rainforest and it has led to beautiful and dense green vegetation with plant species so unique that you will not find anywhere else in Zimbabwe or Zambia.

Victoria Falls also happens to be one of the only two places on earth that has what is called the Lunar Rainbow or the “Moon Bow.” This is a natural phenomenon that occurs at night only when there is a full moon. The light rays from the moon refract when they get in contact with the rising spray from the falls creating a big bright and beautiful Lunar Rainbow. So every month for 3 days during the full moon the falls are opened at night to allow people to witness this natural phenomenon.

The Victoria Falls create a rising spray that can rise up to 1 kilometre in height and from afar it looks like smoke rising to the sky. This is where the local people got the name “The Smoke That Thunders” as the Falls roar or have a thunder like sound that can be heard from a distance.

The Victoria Falls Bridge is so iconic and holds so much history to it and is also something major to look out for in Victoria Falls Tour. It was part of Cecil John Rhodes’s idea to build a railway line that connected the Cape to Cairo. He died before its completion in 1905 but thanks to him the bridge still lives to this day. It is not only beautiful but is also an amazing work of engineering as the engineers and constructors planned with no computers and much technology like there is today. The bridge connects Zimbabwe and Zambia which before independence were northern and Southern Rhodesia.

Victoria Falls is also made unique by the amazing Victoria Fall Activities that are on offer. There is always something you can do in Victoria Falls depending on your age, time you visit, needs or budget; you always find something for you. For those up for adventure and adrenaline and those who would like to relax you will find it in Victoria Falls.

Zambia and Zimbabwe have developed tourism centred on Victoria Falls. Tourism began after 1905, when the railway to Bulawayo was built. Due to the guerrilla conflict in Zimbabwe, the number of tourists had decreased by the 1960s. However, following Zimbabwe’s independence in 1980, the region became relatively peaceful, and tourists began to return to Victoria Falls.

This is by far the most daring activity yet as it allows you to explore your inner daredevil side by swimming right up to the edge of the waterfall and watching the water as it flows upstream and over the edge as it goes tumbling down. It is such a fun and Devils Pool activity that makes a bucket list for the brave.Victoria Falls is unique and special in its own right and in order to appreciate it more you need to see and experience it in person and up close. Let’s connect with Falcon Safaris & get the most out of your Victoria Falls Trip. 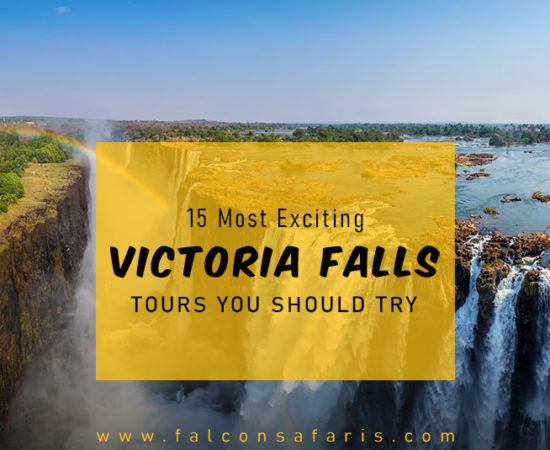 15 Most Exciting Victoria Falls Tours You Should Try 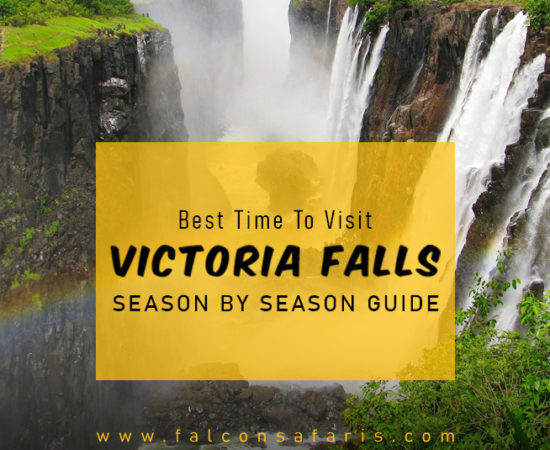 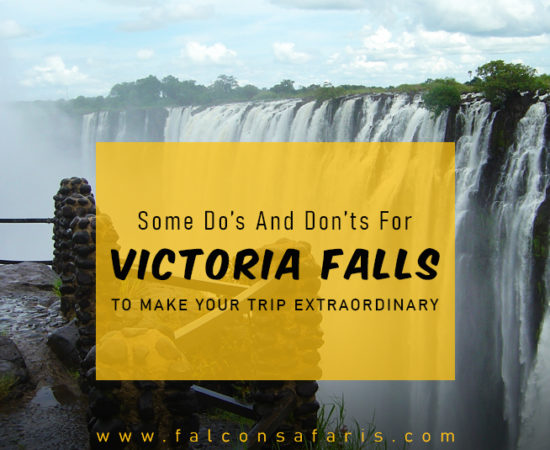 Victoria Falls in Africa: Some Do’s and Don’ts to Make Your Trip Extraordinary 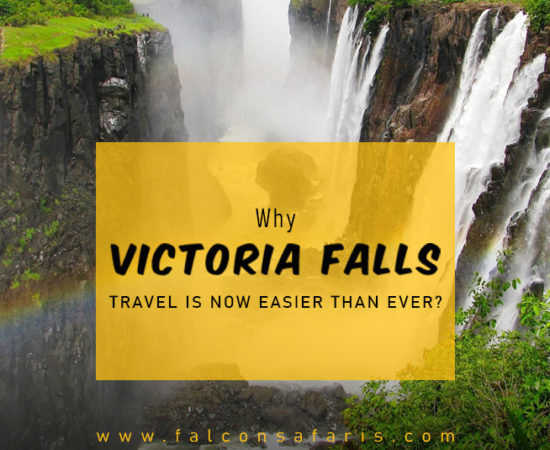 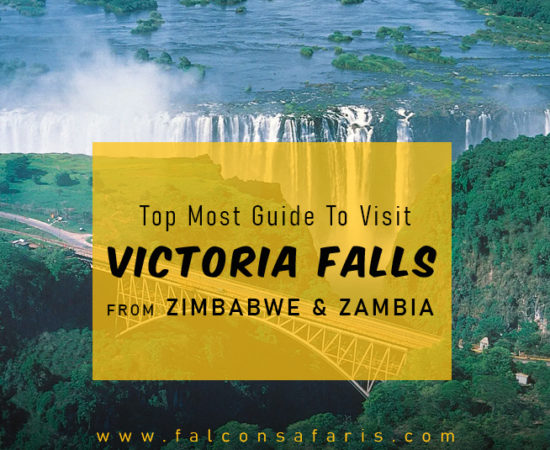 Topmost Guide To Visit Victoria Falls From Zimbabwe And Zambia 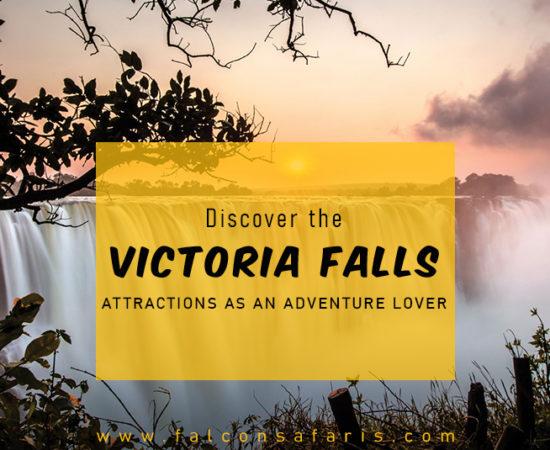 Discover the Victoria Falls Attractions as an Adventure Lover