This activity is located on the 2500 hectare Victoria Falls Private Game Reserve, (sometimes referred to as the Stanley and Livingstone private game reserve), just 12kms from Victoria Falls town. This pristine piece of African bush shares a boundary with the 56 000 hectare Zambezi National Park and has the Masuwe river running through its middle.

The entire reserve is fenced and is home to the Big Five (lion, leopard, elephant, buffalo, rhino). The reserve is guarded by specially-trained rangers who protect the rhino, but they are wild and roam freely.

There is a resident pride of lion and also a good population of leopard both of which are seen relatively often. Several elephants have also made this sanctuary their home. Other species of plains game such as buffalo, giraffe, zebra, impala, sable and eland are quite plentiful.

Summary of this Afternoon and Evening Game Activity

This adventure-packed activity consists of three different sections; an afternoon game drive, during which time you will also search for the resident black rhino, a night drive and finally a three-course dinner under the stars.

The activity starts with pick-up from your hotel in the late-afternoon by your guide who then drives you to the reserve, no more than 20 minutes away. Once inside the reserve, the game drive begins. You will be returned to your hotel by about 9 pm after your bush dinner under the stars.

About the Afternoon Game Drive and Rhino Search

Drives are tailored to the guests' interests, but the most popular focus on this particular game drive is searching for the endangered Black Rhino. Their population on this reserve is healthy but they have a big territory in which to roam, so it is certainly not guaranteed that you will find them but there is also a good chance that you will.

The black rhino found here are different from the white rhino that one finds on rhino walks in the Mosi-oa-Tunya National Park in Livingstone. These are browsers, not grazers and they are more aggressive than their counterparts, hence you don't walk with these chaps. The black rhino have pointed lips to pluck leaves from branches and the white rhino have square lips, ideal for cropping grasses.

They are also highly secretive animals, so the search is all the more exciting and when one actually gets to encounter these huge, almost prehistoric beasts, the sensation is all the more rewarding. On our last visit there we were lucky enough to encounter three separate individuals, one of which had a calf and words are inadequate to describe the experience.

The drive though is not only about the animals but also about the birds, trees, flowers, insects, animal tracks and grasses. The guides seem to have an endless amount of knowledge which they cannot wait to share with you.

Rhino search is part of the experience

About the Night Drive

Sundowners and tasty snacks are served at one of the impressive viewpoints on the reserve, and the magnificent colors of a great African sunset are unlikely to disappoint you. As the darkness settles and the stars start to shine bright, you will start heading back to the boma area for dinner.

Along the way, your guide will use a spotlight to search for any of the nocturnal species, whose turn it is now to come out and hunt or forage for food. The guides are trained to use the spotlight in a responsible manner, the aim is to minimize disturbance to the game during these safaris. Red filters will be used for close-up viewing of the game.

Nocturnal species that are possible to encounter include lion, leopard, hyena, jackal, night apes, honey badgers, civets, genets, and servals to name just a few. Most National Parks and Reserves are closed and off-limits as soon as the sunsets. I have always felt a bit cheated by this because that's when you want to see what happens in the African bush at night.

Leopard saw on the night drive

About the Bush Dinner

A three-course dinner, with the main course being a buffet-style barbecue (braai), is served in the campfire Boma area, which has open-air and undercover seating arrangements. Personally, one of my favorite experiences is to sit out under the African star-studded night sky, enjoying a good meal, a few drinks and good company. Drop off back at your hotel is normally around 9 pm depending on how long you wish to enjoy the evening.

One of the reasons we recommend this experience, is that you are getting several activities bundled into one. Finding and seeing the rhino is also a surreal experience that you are unlikely to forget.

The game drive is ideal if you are excited about seeing rhino and also want to get out and see some wild animals, but it cannot be compared to game drives in one of the national parks close by which are much wilder.

The three-course dinner offers a good spread of tasty food (mostly meats and salads) and fits in well with the outdoor environment in the African bush, under the stars and around the campfire, but it's not going to win any culinary awards.

A word of caution - the nights in the winter months of June and July can get very very cold. Rain during December, January, February and March can also change the experience. Please contact us to discuss further.

What to Bring on this activity

What you Need to Know 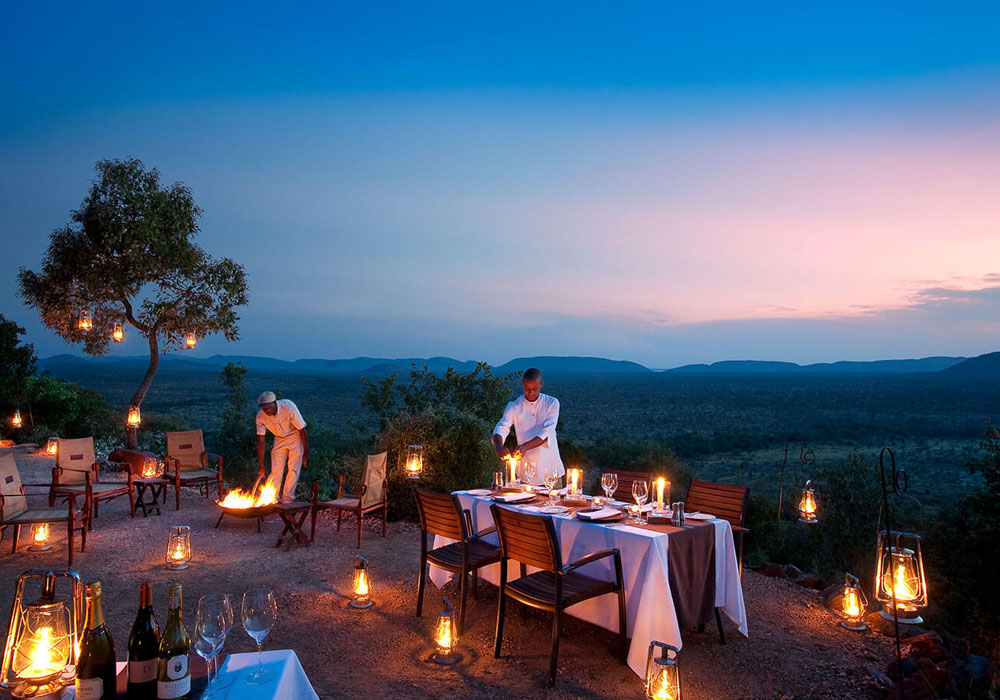